Well.....I began with good intentions.  Thinking of cool things in a rain forest, I naturally thought of piranha.  I did a search, but unfortunately for the quest of knowledge, the first hit was the 1978 movie Piranha.  I've been breaking my brains over a math class all week and had reached the point of frustration where nothing sounded better than feeding innocent people to hungry piranha.  Oddly enough, the 1978 movie is supposedly quite good.  I wouldn't know.  The video store only had MEGA PIRANHA.  It's a new release and is gloriously, hopelessly awful.  It was just the thing--people tromping through the rain forest (although not Suriname) and the piranha getting bigger and meaner every minute until they ate a nuclear submarine and the only thing that saved the world was that a brave navy seal got in the water with them and killed one thereby causing a feeding frenzy.  Why this caused a frenzy instead of just one piranha gulping the dead fish parts and then continuing toward Washington DC I don't know.  And I don't know why it worked this last time when it didn't work twice before earlier in the movie.  The important thing is that mankind is saved! And the bad guy got eaten (fish leaped out of the water and ate him, helicopter and all).

The moral here is probably a good one---don't go swimming in remote Amazon rivers. (I think I may have figured out this moral without help)  And stay seated in the boat!  No one in this movie had any kind of balance whatsoever and would fall into the river at the slightest movement.   But no need to worry about crocodiles, hippos, leeches, bugs or anything else--apparently those things never bother anybody.
Posted by Anneli at 8:53 PM No comments: 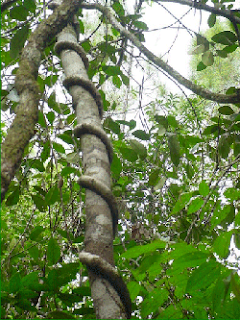 Check out this cool tree trunk from the Suriname rainforest.
Posted by Anneli at 1:58 PM No comments: