Oh NO!! I was all excited to go to Fisherman's Wharf in San Francisco and go to the Giradelli Chocolate Factory. 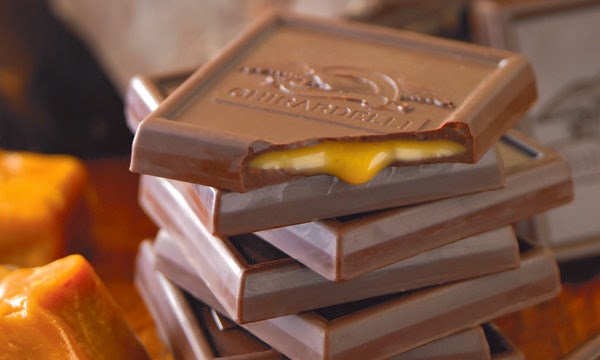 It sounds wonderful online and one website even claims that you can sample all the chocolate you want. Apparently not true. A number of people in my office say it's a blah attraction. Boring, only two samples and the chocolate is cheaper at the 7-11 down the street. I am crushed.
Posted by Anneli at 10:55 AM No comments:

Perhaps the best and most important place in California is Riverside, where my daughter Catherine went on her mission. She was originally called to the Corona mission, but was then asked to help open the Riverside mission.

We were surprised to hear they'd opened a new mission, but not at all surprised that Catherine sent to help. She's a natural leader, and fearless of going to new places. Unfortunately, Riverside does not apparently have good doctors. Catherine became seriously sick and saw many doctors in the area none of which had any idea what was wrong. I could forgive that because the doctors here in Utah have no idea either. They finally sent her home with a scary diagnosis of Pancreatitis. About the only thing the doctors here solidly agree on is that whatever is wrong, it's certainly not pancreatitis.

On the way to deciding that they had no idea, they took out her gall bladder. Which led to the number one absolute best mission picture ever. 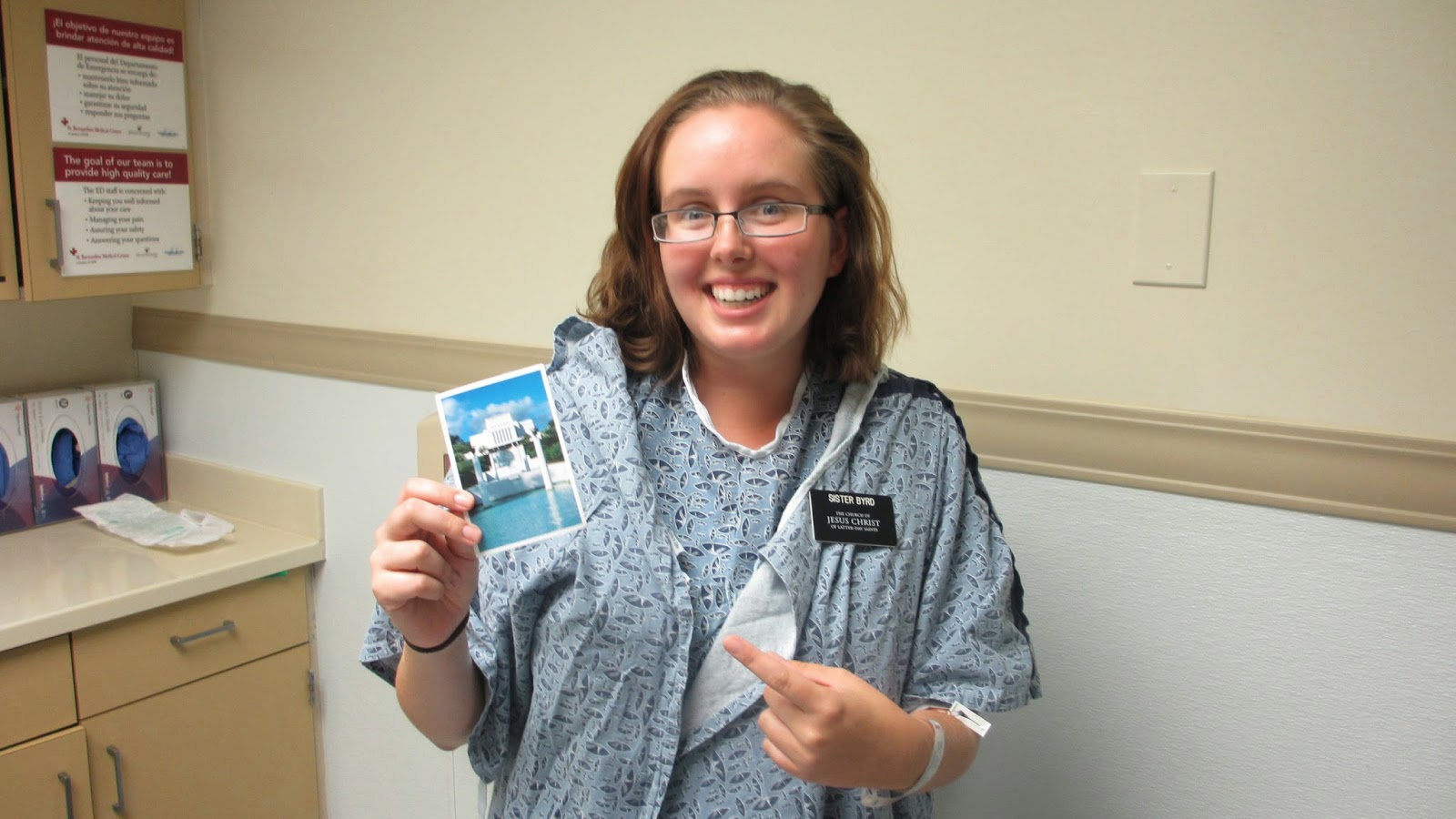 That's MY girl---standing as a witness at ALL times and in ALL places. She did some wonderful work while she was there, and Riverside will be forever blessed.
Posted by Anneli at 12:41 PM No comments:

Oh wow! I want to work at the zoo for a summer just to be able to do all of the safaris!  You can see and do everything and I want to. Money is a bit of a problem--since the safaris run about 50 to 80 dollars each and there are MANY to choose from. I especially want to feed the rhino. To my surprise, the African safari looks--at least from this picture--exactly the same as I remember it from when Grandma and Grandpa took me 40 years ago. 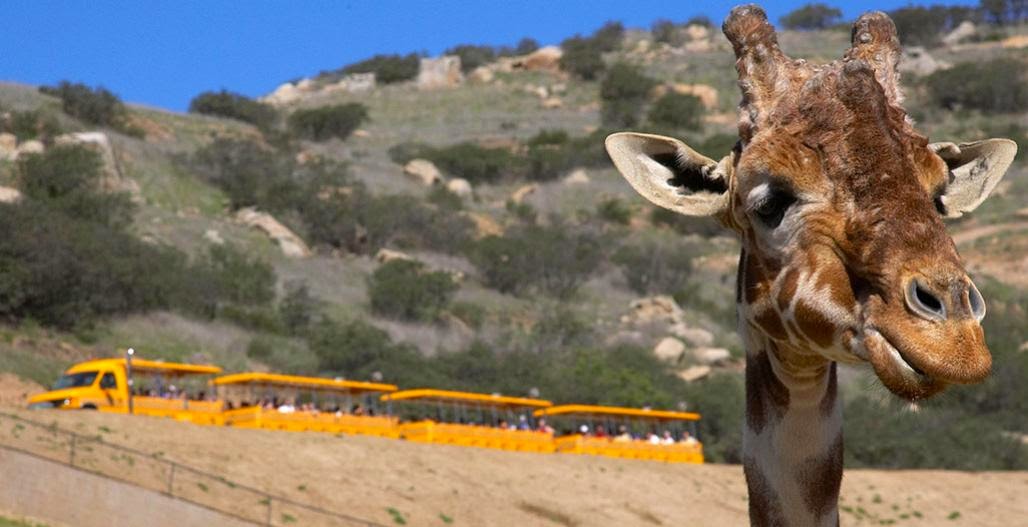 I'm also fond of flamingos, so I was glad to see they are still in residence. 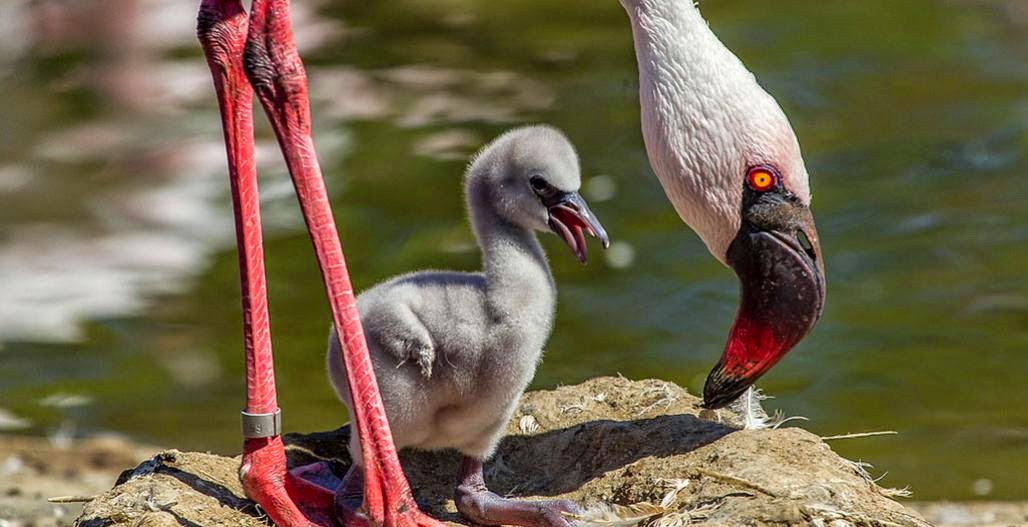 But perhaps coolest of all are the webcams, which are free and that anyone can enjoy. There is a tiger cam, elephant cam, ape cam, condor cam, panda cam and more. The website is terrific.

Maybe when I retire, I'll move to California just for the theme parks. I really love them. I could be the sweet little old lady working retail. I'll spend a year in every park.
Posted by Anneli at 10:40 AM No comments:

Grandma and Grandpa used to live in San Diego which at once makes California one of the most magical places on earth and also one of the most boring as far as virtual traveling goes, because I've been there so many times. HOWEVER, anyone who knows me at all, knows that California is pretty much synonymous with Disneyland in my mind. I've heard wild rumors that there is more to California than just Disney, so for this month that is what I'll explore starting with the Redwoods.
But first, I should explain how one gets to California. You start in Utah with the blue station wagon. No one wears a seatbelt. The 10 year old is lounging in the back with a lifetime supply of books, puzzles, games and snacks. You drive straight to Las Vegas where the temperature is 110 degrees in the shade. There the car breaks down. The car is pushed or towed to the mechanic. Mom hauls out the cooler full of food (german cold cuts, homemade bread, mustard, watermelon) that nobody wants to eat because everyone but Mom wants to eat out. Plus for some reason we are not waiting in an air-conditioned building--maybe they don't allow food--we are sitting on the curb in the heat. Mom eats a sandwich. We eventually nibble on some watermelon. Now we are hot AND sticky. Eventually, the car is fixed. It's late now. Mom and Dad alternate driving so they can get through the desert at night. Ten year old sleeps until the car arrives at Grandma's house. Mom and Dad stressed and exhausted. Ten year old ready for Disneyland. 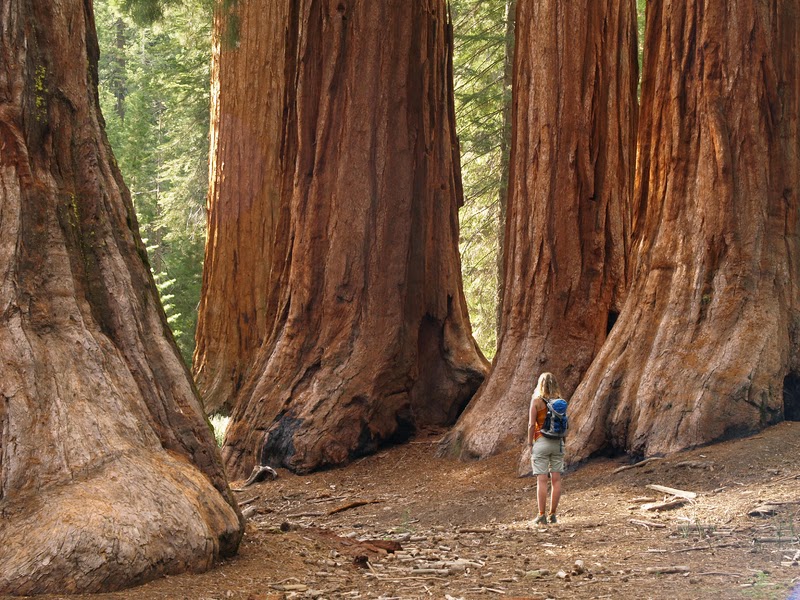 The redwoods really are magical. I got to visit once during one of those famous summer trips, and I've never forgotten them. One of my co-workers recently visited with her family and what was remarkable about her vacation was that she looked really rested when she came back. There's a lot to be said for a mellow vacation--a stroll on the beach, a trip to the Redwoods.

When we went took me, we naturally drove through the tree with the station wagon. I thought it was so cool and I still do. 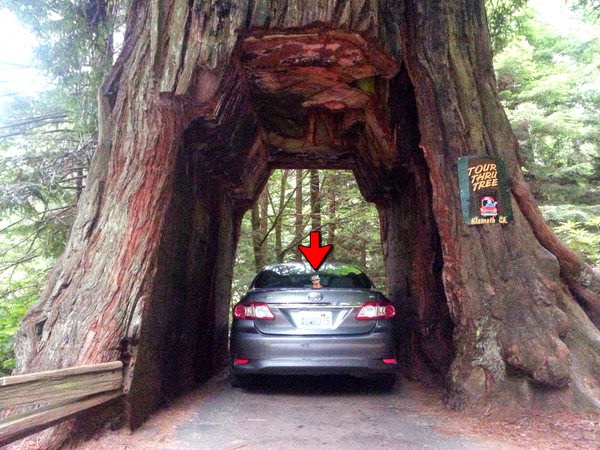 Posted by Anneli at 1:02 PM No comments: