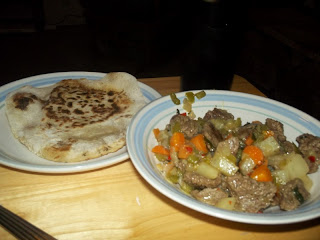 We had our Somali dinner last night--not bad, I wouldn't consider anything I made as one of the world's "best recipes" but trying one recipe hardly qualifies me to be making any judgements. The thing that struck me was the lack of thickening ingredients. I made "Qumbe" which is a kind of coconut dessert--all it was was milk and sugar stirred for 15 minutes (which feels like a very long time) then put in the coconut and some cardamom and stir some more. Eventually, you're supposed to put it in a pan and refrigerate and then cut into squares. What I got was sort of the consistency of the inside of an almond joy bar. Not bad, but I think a little cornstarch would have simplified things a lot. The Suqaar was a stew. Same problem. As instructed, I first boiled the meat and then poured off the water (which to me means pouring off a lot of the flavor. Then I fried the meat with some onions in oil, added fresh water and vegetables and again let it cook down until almost all the liquid was gone. Not bad, and would be even better if I had more experience with peppers. The fry bread "Sabaayad" was great. It's hard to go wrong with fry bread. I dutifully rolled it out and then folded it up and re-rolled. No idea what that was supposed to accomplish, but it felt like the sort of motion that had been done for hundreds if not thousands of years. I remember making bread with my grandmother who always made it the same way out of long training and habit. This is probably the same kind of thing. While we ate, we watched a National Geographic special about an African soccer team from Zanzibar. Wrong country, but at least it was on the east coast and there were African faces and sounds to accompany the dinner.
Posted by Anneli at 9:25 AM No comments:

Yea! Blogspot seems to be back in order. We're having two meals from Somalia--going with the business man's assessment that "Somalian recipes are the best". So far so good. For breakfast on Saturday we had "Khamir" it amounts to homemade doughnuts flavored with a little coriander and nutmeg and served with dates. No sugar on the doughnuts--maybe Somali's don't have such a sweet tooth as Americans. They were very good. I don't know why I dont' eat more dates. They're delicious.
Posted by Anneli at 8:50 AM No comments: