We had Dad up for a Dominican dinner.  Interesting. First course was a kind of potato soup. Didn't taste bad, but it was supposed to be made with malanga. Best I could figure, malanga is a type of root vegetable similar to yucca. In a pinch the internet said I could use a potato or a sweet potato. I hunted all over town and finally just bought some fingerling potatoes. These are cool because they come in red and purple. The effect of them in a soup though is to turn the soup gray.  It was a little bland and looked unappetizing, but it wasn't terrible. The muffins, which were supposed to be made of another mystery substance similar to cornmeal (I used cornmeal) didn't use baking powder, and were flat and not very good.  The pork chops, however were great! 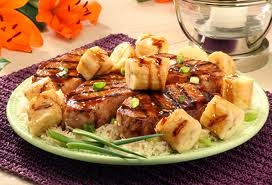 I rubbed the chops with cumin and put them in the oven (too cold to use the BBQ).  Then I wrapped banana chunks in bacon and put them on the chops for the last 15 minutes.  That was really good! The banana on the pork was an unusual and delicious flavor. Bacon of course, improves everything.

Dessert should have been better, it was a mango banana bread. Not terrible, but would have been greatly improved with coconut and chocolate chips.

We put on steel drum music and wore the loudest shirts that we had.
Posted by Anneli at 1:12 PM No comments: