I've mentioned before that the hiking in Norway is fantastic. It can be as rugged as you like and some of those mountain hikes by the fjords look amazing.  For myself--who am getting more rickety by the minute, I think I'll mess around in the Finnskogen that has beautiful and gentle forest trails. 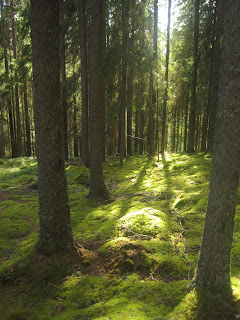 I think I may never come home.
Posted by Anneli at 11:21 AM No comments: 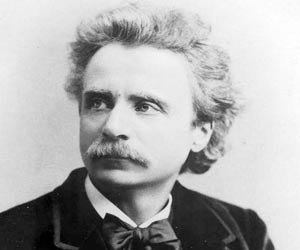 This is Edvard Grieg, Norway's most famous composer. He's the one who wrote the gorgeous Peer Gynt Suite, but he also wrote the concerto in A minor, which is important because I learned to play the famous grand introduction to the piece.
Posted by Anneli at 11:15 AM No comments: 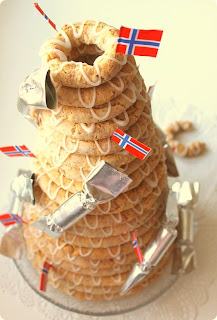 This is kranselkake--the traditional Norwegian cake.  It sounds like it will take a couple of days to make and be very difficult--so, naturally I'm going to try it.  I've been looking at other Norwegian dishes and once again, I am confirmed in my belief that I am living the wrong life. Everything has a million calories and is loaded with nuts and cream and bacon grease --just like Omi used to make.  The difference, is that Omi got up early and worked very hard on the farm, whereas I get up a whole lot later and sit in an office. I don't know that I'd really enjoy farm work, but if after working for three hours I could sit down to a breakfast of waffles with cream and lingonberry sauce, and dumplings sliced and fried in bacon grease. My grandparents lived into their 90's--something to be learned here I think.
Posted by Anneli at 9:58 AM No comments: