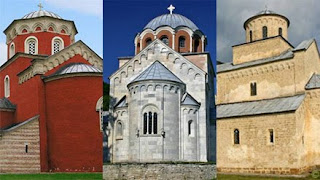 Balkantravellers.com posted these three pictures of monasteries in central Serbia. The names are Zica, Studenica and Sopocani.  They all have beautiful frescos especially the last.

What I like though is that the names of the monasteries are so magical--straight from a fantasy novel.  Listen to this description, "After having attracted some of the most skilful artists of Byzantium and the best builders of Zeta...they financed several masterpieces of medieval architecture."

Love it.  If I were ever transported to a real life medieval fantasy, I'm sure I would have to go to Zeta to recover the stolen treasures hidden in the monasteries of Zica, Studenica and Sopocani.
Posted by Anneli at 2:32 PM No comments: