The first library was started on June 7, 1791 when 48 men, each paying 16 shillings ($2.67), became shareholders by signing the association's constitution whose purpose was to promote knowledge and piety. The books were "bid off" at quarterly book auctions held at first at a tavern in Brookfield Center where an old chest was kept. This was described as "a plain wood-colored affair, four or five feet long, about two feet high and as many wide, tightly padlocked, which is supposed to have held the first precious volumes of the library."
About 1850, when the question of women's membership arose, Howard Griswold, a library officer at the time, made a motion to allow the "fairer sex" to bid for books. His daughter Selinda had been attending the meetings to help him check out books. The motion was passed "more through fear of discourtesy than otherwise.... Miss Griswold braved alone the criticism of a woman who was so unladylike as to appear in public, for two meetings before her younger sister, and then two other women, joined her.

It's really hard to find a picture of the library. Even their own website doesn't have a picture, although it does have this spiffy floating bridge. 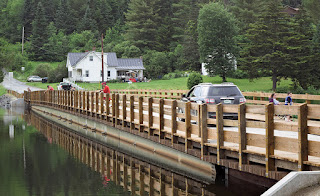 If you do a search, you'll also find pictures of the town offices. I don't know why, this is not the library. but here it is. 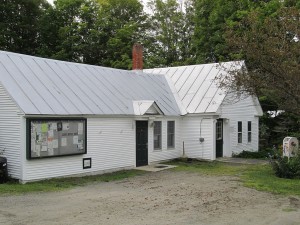